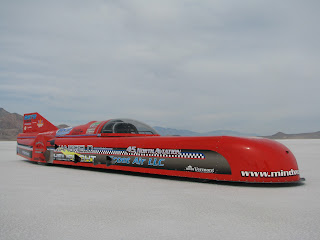 The pistons have been inspected and it looks like we won't have to replace them after all.  A few minor repairs and we should have the engine back together soon!  Dan has started working on quarter panel repairs in preparation for the St. Albans Rotary Home & Recreation Expo.  The car will be a "feature attraction" at the Collins Perley Sports Complex from March 18-20, 2011.  Don't miss this opportunity to come out and see the car up close and personal, chat with Dan and the crew, and check out our 2011 documentary "Getting Up to Speed: The 300 MPH Chapter"
Posted by Dan Marcotte at 10:33 AM 1 comment:

The crew borescoped the engine this weekend and found the inevitable...piston damage from the 300.1MPH run.  The engine will come out after the New Year and we'll get to work putting a new set of pistons in.  Want to support the cause?  Let us know!  We have unique sponsorship opportunities available.

Want to see the car up close?  It will be on display at the St. Albans Rotary HOME AND RECREATION EXPO at the Collins Perley Complex in St. Albans from  MARCH 18th-20th!  More Info
Posted by Dan Marcotte at 1:40 PM No comments:

Back from the Salt Bash Scheduled... 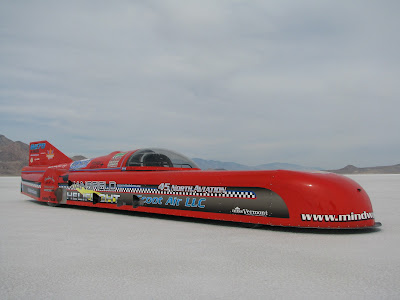 Saturday, October 30, 2010
5PM at Dan's Hangar
Airport Road, Swanton, VT
We'll have the grill going with hamburgers and hot dogs
and will provide water and punch
You may wish to bring something to share (not required!)
Are you planning to join us?
Let us know by email dan@mindworksvt.com
Posted by Dan Marcotte at 10:42 AM No comments:

On the road again...

The 300 MPH 8270 A/BG Streamliner
Well today was the final day on the Salt.  After changing some spark plugs this morning the engine was running like a charm and we were all excited to get the car up to the starting line to make some good runs in the cool morning air.  Last night was the first night all week it didn't rain during the night and the salt was in good condition, the sky was clear, and the air was crisp. 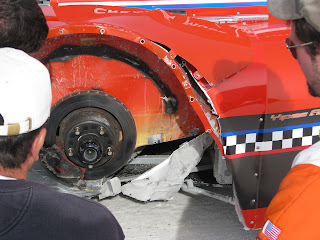 On the tow up to the starting line we had a major blow out of the left rear tire.  The force was strong enough to do quite a bit of damage to the quarter panel and wheel well as you can see here.  On one hand this was a devastating situation.  We had to get the tire changed (no small task) and it meant there would be no more runs.  On the other hand we were all so grateful, thankful, and relived that the blow out happened at 20 MPH on the tow and not at 290 MPH on the track.  None of us want to think about what that would have meant!

So...were bringing back a 300 MPH car and that is beyond EXCITING!  The damage from the blow out can be fixed and it will give us an opportunity perhaps to investigate setting the car up to run different tires for next year.  We were disappointed not to have the additional information that a couple more runs today would have given us about the supercharger set up that we're now running---but Dan and the entire crew agree that the trip was a HUGE success! 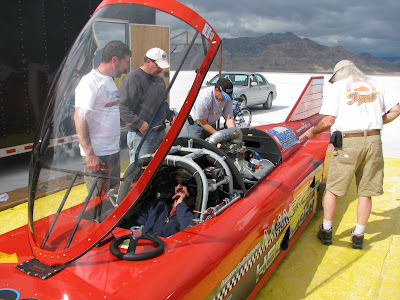 300.104 MPH is still our top speed.  Today we learned a lot!  Hats off to the crew!  We completed an amazing amount of work on the Salt today including rebuilding the exhaust outlets (which began to disintegrate during the last run yesterday), changing the supercharger pulley and set up (through one failed run when we blew another alternator belt and supercharger pulley belt), carb jetting changes, supercharger alignment correction, and changing one parachute pilot chute lead.  This may not seem like much...but it was an incredible amount of work on a steep learning curve.  Today it became very obvious that 300MPH puts us in a new speed arena...where a lot of things change.
Losing the alternator and supercharger pulley belts in the first run this morning resulted in a run that ended prematurely at 280+MPH.  We picked Dan up at the about the 6th mile.  Dan was excited about the power that the car was making through the first couple of miles, but the car shut down in the 3rd miles.  We found the issue immediately when we pulled the engine cowl.  Several hours of work paid off and we were able to get a second run in at 6PM.  Again the power that the car laid down from the starting line was incredible.  Dan felt like it certainly would have been a run over 300 MPH, but the car left the 5th mile at 290 MPH.  When we pulled the data from the O2 censor it showed that the we were leaning out right from the start until by the end of the run the air fuel ratio was too lean to develop power.

Finding ourselves in this "new league" everyone is putting their heads together to problem solve.  A phone call to Joe Woodward back in Vermont on the ride back to the hotel netted some valuable information and we've got a game plan for tomorrow morning.  Dan got a feel for the potential in the car these last two runs and we all eager to see if we can get some more performance tomorrow. 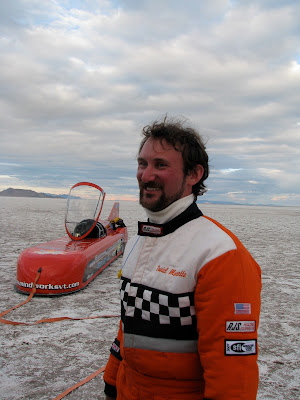 Dan's thought for the day:  Of course the goal today was to get the car over 300 MPH...and learn how to use and maximize the supercharger....bottom line...today I just really had fun running the car!

A nice treat today:  Land speed legend, Tom Burkland, stopped by the pit today and spent a good half hour or so with Dan and the crew.
Posted by Dan Marcotte at 9:33 PM No comments:


Check out some on-board video
footage taken from the parachute mount:
Can't get your head around that speed?  Folks, that's 440 feet per second or 146 yards per second!  To our local friends...the full run from 0 MPH down the entire course is like going from Bakersfield to Enosburg in 2 minutes! 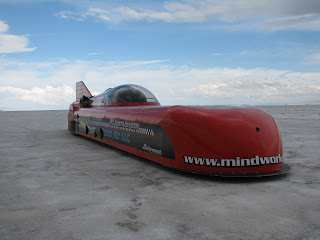 Dan had a good morning pull...but by the fourth mile there was lots of coolant smoke coming into the cockpit.  We later discovered water pump had lost power and we were able to fix it.

We were hopeful for more speed so we changed the super charger pulley for more boost but during the second run we had an alternator belt failure.  There are a few more issues to work out with the higher boost levels so we'll be making some repairs and adjustments in the morning.

A rain storm blew across the salt late this afternoon so we packed it in after the second run.

Crew Highlights:
Dan:  Duh!  (he says with a big smile...'nuf said)
Dru:  Boost!
Mike: Watching someone reach a goal that he set out to conquer years ago!
Sarah Jo: Seeing all of Dan's hard work pay off...goal achieved!
Stay tuned for what comes together tomorrow!
Posted by Dan Marcotte at 7:25 PM 1 comment: 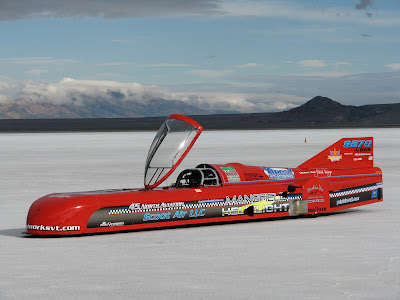 The car hooked up great through the third mile and Dan felt good about bringing it up to speed a little.  We haven't changed the supercharger belt or anything yet...so this speed means that all of the aerodynamic changes made over the past months really paid off.  Unfortunately the wind picked up and after a couple of hours of waiting the officials closed the track until morning.

Here are the highlights from the crew:

Dan:  "Not sinking into the marsh half a mile past the 8 mile marker!"

Dru:  "Seeing that the 2010 aero package was worth the effort"
Mike:  "Hearing that Danny Thompson walked away safely from his wreck"
Sarah:  "Jumping out of the truck and hugging my boy after a 294 MPH run"

The parachutes didn't open the way they should have today so it took Dan three miles to slow the car down.  We'll take another test run tomorrow to see if some changes we made make a difference.  Otherwise Dan will be pulling the chutes right after the 5th mile to avoid going off the graded track.  Today's run took Dan past the 8th mile and into some soft salt.  The crew got a workout pushing the car back to the return road!

As we were leaving tonight...Salt legend, Skip Hedrich stopped by our pit.  "Can I look at your 'liner?"  he asked Dan.  What a special treat to have someone like Skip who runs an amazing car of his own routinely over 300 MPH want to see your car!  The guys chatted for quite a while and we got some good feedback from him about our parachute situation.  Check out Skip and his car: http://www.hedrichmotorsports.com


What will tomorrow bring?  Stay tuned!

Promote Your Page Too